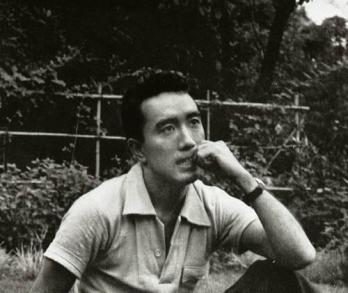 Even though Yukio Mishima was known to me as a great writer, I am ashamed to say that I had never read any of his books.   The only thing I knew about him – the strange and gruesome manner of his death by Seppuku, or ritual disembowelment, the way of the Japanese warrior – had always painted him in my mental landscape in surreal tones.  After the Banquet is the first book by him that I am reading – now that I have read it, I am planning to read many more.

I had expected something of the dreamy imagery of Kawabata or the mythical magnificence of Ryanosuke Akutagawa in Mishima’s writing: in fact, I was under the false impression that all Japanese writers wrote like this.  I could not have been more mistaken.  Because Mishima is very down to earth (even though the metaphor is there), and he writes of the most unromantic thing there is – politics.  Strangely, he manages to weave a love story into this world!

Politics meant pretending to step out to the men’s room and then completely disappearing, forcing a man’s back to the wall while cheerfully sharing the same fire, making a show of laughter when one is angry or flying into a rage when one is not in the least upset, sitting for a long time without saying a word, quietly flicking specks of dust off one’s sleeve… in short, acting very much like a geisha.

This is the world Kazu, the redoubtable middle-aged female protagonist of this novel enters when she falls hopelessly in love with Yuken Noguchi, idealist politician of the Radical Party. The problem is, Noguchi cannot see practical politics for what it is: a form of ideological prostitution. Kazu who has come up in the world the hard way bears no illusions – Noguchi, for all his bookish wisdom, has a lot of them.

Kazu is the proprietor of a Setsugoan, an After-Snow-Retreat, where she is in the habit of entertaining the high-and-the-mighty of Japan. One day after a banquet, Tamaki, former ambassador to Germany, collapses in the toilet. The subsequent hullabaloo manages to throw Noguchi and Kazu together, and this gentleman of sixty and woman of fifty find themselves falling head-over-heels in love like teenagers.

They become man and wife, and soon afterwards, Noguchi is chosen to run for office by the Radical Party. What is essentially an ideological fight for him, however, is just a fight for victory for his wife. Her methods which are not wholly fair and aboveboard invite Noguchi’s wrath and their relationship soon begins to crack. And soon, Caesar’s wife is attacked: then events proceed at a pace which nobody can control.

The novel is a masterful study of essential human nature in the dirtiest arena available in the modern world – democratic politics. Kazu, though she is ruthless in her efforts to get Noguchi to win, is essentially honest about herself: there is no self-deception. Her love is unconditional. Noguchi, on the other hand, is cold and callous about Kazu even though he is the epitome of political honesty and idealism. And society stands exposed as the most morally corrupt there is, where it cannot see the essential honesty of Kazu and must judge her by bogus moral standards.

Mishima seamlessly interweaves the physical background into the psychological landscape of his characters: thus Kazu’s well-kept garden in the Setsugoan becomes her symbol, metamorphosing and changing shape in tune with the development of her character. In contrast, Noguchi’s home is cheerless and stifling, permeated by the spirit of the ponderous tomes of serious literature in foreign languages that Kazu cannot understand. Similarly, Kazu’s wardrobe is elaborate and lovingly described (especially the patterns on her kimono) whereas Noguchi wears shabby western attire most of the time.

(I am once again captivated by the pictorial use of language by Japanese authors. This is also evident in the use of camera frames resembling paintings in Japanese movies – Ran by Kurasowa, for example.)

The most engaging character is Yamazaki, Noguchi’s Man Friday and genuine friend of Kazu (perhaps the only person who accepts her as she is). He can see politics for what it actually is.

Corruption in an election or the victory of moneyed power did not in the least surprise him; they seemed as natural as stones and horse dung along a road.

At the end of the novel, we meet a chastened Kazu after the lavish banquet of an electoral battle, ready for life’s banquet. One can only wish her luck.