Last Saturday, we had our monthly book club meeting where one member quoted from a book of local farmer lore: about how the earth was not farmed for a certain period of time when it was considered to be menstruating! I immediately remembered a piece of lore of the Kerala fisher-folk I had heard years back.

In Kerala, we have Saturday something called “chaakara”, when fish come to the surface in great numbers and the fishermen have a fine time just scooping up the fish in large numbers. The interesting thing is that for some days before this, the sea turns red: and the fishermen don’t venture out. Kadalamma (“Mother Sea”) is supposed to be having her periods.

What we are seeing here is a variant of the almost universal mythical theme of equating nature – prakruthi – with Woman. And since myth is almost always written by men, the woman becomes the passive object – the “eternal feminine”. Before we go into the politics of this, however, I would like to look at this concept in a bit more detail.

The Myth of Ahalya

The Samkhya Philosophy posits the evolution of the universe, and its continued existence, on the interaction of the active principle (purusha – “male”) with passive principle (prakruthi – “nature”). (A week ago, I witnessed a play by a group from Pondicherry based on this theme, composed entirely of scenes of male-female fusion – some of them violent – without any dialogue. It seems that this concept still holds sway even among progressives.) In the Vedic religion, the woman is continuously referred to as the “field” and the man as the “sower”. And reading a book on the knightly quest for the Holy Grail by Joseph Campbell, I find this:

Because of the tendency to anthropomorphize—a tendency characteristic of ignorant peoples—the feminine earth notion takes definite form, finally, of a goddess, and the masculine fertilizing principle takes shape in a vigorous god. The union of god and goddess, it is thought, results in the abundant fertility of nature.

I immediately thought of Indra – the rain deity of the early Aryans who held sway in the Vedic religion before the trinity of Brahma, Vishnu and Siva took over – who is indeed a vigorous (and oversexed) god like the Greek Zeus. Indra used to run after women, rather in the vein of Zeus: and in the context of the current topic, the myth of Ahalya is instructive. 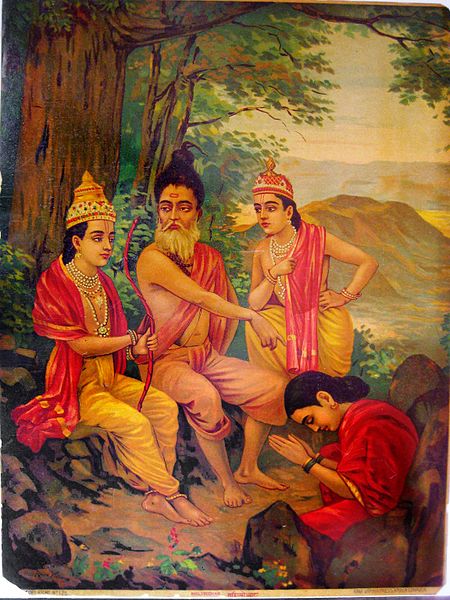 Ahalya being released from her curse – painting by Raja Ravi Varma

Ahalya was the wife of the sage Gautama, who was desired by Indra. Once when the sage went out, Indra assumed his form and seduced her. Gautama came to know of this deceit, and cursed Ahalya into a stone (and according to one version I heard, cursed Indra with a thousand penises – however, these have been sanitised into eyes subsequently). Ahalya was imprisoned her rock form until Rama came and set her free, in Treta Yuga.

One analysis of the myth is provided by Prof. Leelavati in the introduction a book about the “Pancha Kanyas”, the five distinguished women of Indian myth. She sees Ahalya as the untilled field (A – Halya: “not-ploughed”) and Gautama as the sun (Gau – Tama: “earth-warmer”): Indra, as rain, fertilises it. So shorn of all moralistic preaching, this could be a very ancient myth of a people, slowly moving into an agrarian mode of life from one of hunting and gathering. The act of seduction here is thus desirable, as it is what produces life. (Maybe, after Indra fell from grace with the advent of the Trinity, the roles were reversed and he was cast as villain. But note that the sun turns the untilled field into rock – a symbol for barrenness – until Rama, the hero from the Sun Dynasty, comes and changes her back into her fertile form, as one of the tasks in his Hero’s Journey.)

The earth in her feminine form is also mother and goddess (Bhumi). Rama’s consort Sita is not born from a human womb but a furrow in the field, as her father, King Janaka (“creator”), ploughs it. A rather odd occupation for a king, unless we see him as a version of the grain king: the dying and reviving god who is synonymous with the harvest (the myth of Maveli in Kerala is another version). Here, however, instead of the king, it is his daughter who symbolises the grain – and at the end of the epic Ramayana, Sita, spurned by Rama, calls upon her mother and is swallowed by the earth. 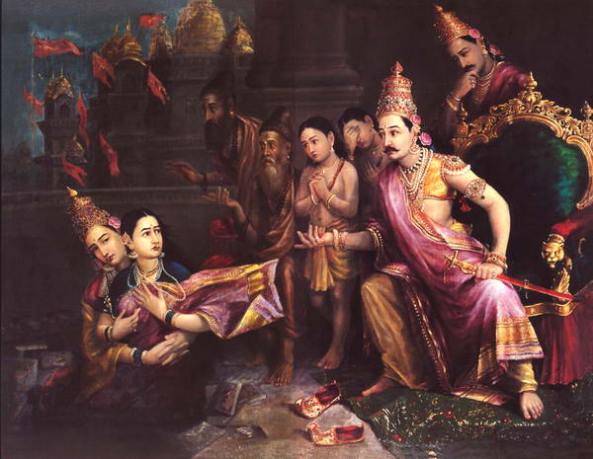 Sita swallowed up by the Earth – painting by Raja Ravi Varma

The two wives of Vishnu, the God who sleeps on the thousand-header cosmic snake and dreams up the whole of human existence has his head in the lap of Lakshmi, the Goddess of Prosperity and his feet in the lap of Bhumi, the Earth Goddess. 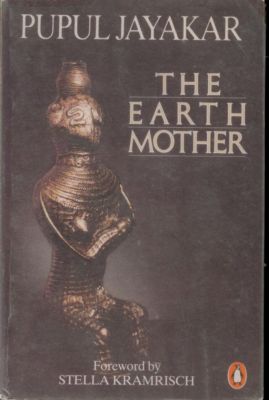 Pupul Jayakar in her book The Earth Mother has compiled different variants of this archetype from across many primitive cultures in India.

All these have convinced me that the concept of nature as feminine predates the patriarchal culture. What has changed as man took over the reins of society was how the feminine was viewed. Instead of a bountiful mother, sometimes nurturing and sometimes punishing but always protective, she became a passive field: a place for the male to “sow his seed” and reap the harvest. The holy mystery of menstruation became a sort of social taboo (as seen in its most virulent form in the recent Sabarimala agitation). Man was in the job of “husbanding” the environment, not being part of it.

Seeing nature as feminine need not be related to the objectification of women. It could be with a feeling of reverence, as women were revered in primitive societies as the people who were responsible for the continuance of the race. The worship of earth (and as an extension of it, nature) may be just what the doctor ordered in these days of rampant and suicidal environmental destruction.

(O Goddess! Having the ocean as Her garments and mountains as Her breasts, who is the consort of Lord Vishnu, I bow to You; please forgive me for touching You with my feet.)